The 1949-50 Lincoln Northeast basketball team, a veteran team that had won the Class A state championship the previous year, played a good one on their new coach.

Apparently, no one pushed the panic button. The team did not lose another game that year. And Ed Johnson hung around and became a legend in Nebraska high school basketball coaching (inducted into this Hall of Fame in 1994).

Scottsbluff figured twice in the 1949-50 school year. It was Northeast’s state tourney finals opponent and the Rockets this time had all the answers, culminating their 19-1season with a 36-31victory.

Guard Bill Bowmaster notes that 13 of the 14 players on this team, and the 1949 team, also played football at NE. And Northeast finished second in The World-Herald’s final football ratings to Omaha Tech, the football team honored by the Hall of Fame as a Golden Anniversary Team in 1999. 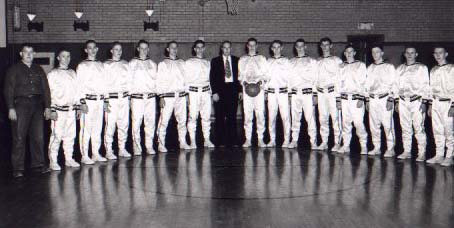