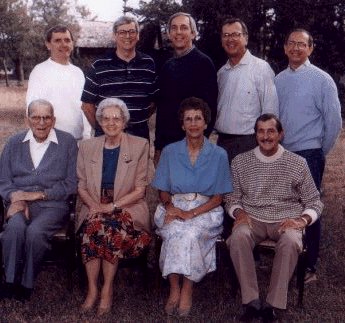 Syracuse
From left: Mom & Dad Nannen, Joyce,Bob.
Back, from left: Gene, Michael, Neil, Lyle, Dick
The family of Raymond (deceased) and Margaret Nannen has been making noteworthy contributions to high school sports since their own playing days.

Raymond played four years of basketball and was a member of Hallam’s 1925 Class F State Championship Team. Margaret Nannen played basketball for three years at Sprague-Martell.
They are the parents of seven children: Bob, Joyce, Lyle, Dick, Gene, Neil and Michael, most of who starred at Syracuse in the 50’s and 60’s and brought the sports spotlight on their hometown during a heyday of state championships.

The thumbnail sketches below do not go into great detail about the next generation, but the Hall of Fame wants it noted there is overhwhelming evidence that wherever the Nannens settled, they stood ready to play and to play hard for their high school teams.Bob Nannen (deceased) – Hallam graduate. Played four years of high school basketball and baseball. Children: Debbie, Doug, Don, Dane and Daniel.

Gene Nannen — Graduated from Syracuse in 1959. Played all sports. All-state in basketball in 1959. Member of Class B state championship team. Made state tournament all-tourney. Listed by Journal-Star as one of ten top athletes in 1959. Children: Nathan, Amanda and Lydia. Amanda had outstanding basketball career at Nebraska City High School (Class B all-state), playing in the 1989 state tournament. At Peru State, she became the school’s all-time three-point shooter.

Neil Nannen — Graduated from Syracuse in 1960. Played football and basketball. All-state in basketball in 1960. Played on 1959 and 1960 state championship basketball teams. Played basketball at Nebraska. Coached for several years, most notably at Beatrice and Grand Island, and is now an administrator at Lincoln East. Long time referee. Children: Kim, Scott.