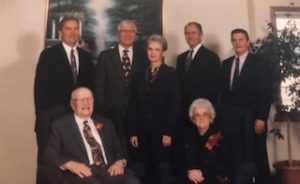 Loomis
Top from left, Dennis, Stuart,Gloria, Charlie, Jim
Sitting: Mom & Dad, Earl and Lenore
Earl and Lenore Thorell of Loomis produced five offspring who were four-year letterwinners in sports at Loomis High School and all went into coaching and teaching. Their combined longevity totals 133 years of coaching.Earl, the family patriach, himself earned four letters in basketball and baseball and then he coached PeeWee, Midget and American Legion baseball for 14 years at Loomis.Here’s a capsule of each offspring:Stuart lettered four years in football, basketball and track at Loomis. He went to college at UNL one year and then to Kearney State where he lettered three years in football. From there, he spent 40 years coaching and teaching at Waterford Township and Waterford Mott High Schools in Michigan.

Jim lettered four years in football and basketball and two years in track. He was all-state in six-man football, played college football at Kearney State winning all-conference honors three times. He also lettered twice in college track, then played baseball for three years in the New York Yankee system before coaching football, track and cross country at Alliance. His cross country teams won one state championship and twice were Big 10 and district champions.

Dennis lettered four years in football, basketball and track, was all-state and all-conference three years and on the 1963 Shrine Bowl all-star rosters. He was all-state in basketball and gold medal winner in the hurdles. He set a long jump record in 1963 that stood for eight years. He played football at Nebraska, going to the Cotton, Orange and Sugar Bowl, did a stint with the semi-pro Omaha Mustangs before taking up the coaching business. He’s spent 23 years at Lexington High School, seven as head coach and served as Shrine Bowl Coach in 1982 and West All-Star Coach in 1998.

Eleven of Earl and Lenore’s grandchildren were multiple sport athletes.