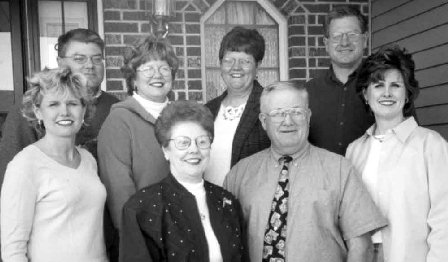 Battle Creek
Front, from left: Linda Walker, Lorraine & Bob, Mary Nordhues.
Back, from left: Craig, Jean Cull, Sandy Gnirk, Robb
The Schnitzlers have a nice home in Battle Creek but, the truth of it, their children grew up in the gymnasium, football fields and other playing fields around. Bob and Lorraine’s six children all were very much into sports. All participated in high school sports, all played a role in State Championships and five went on to participate in college sports. All are college graduates. All are now married and have children of their own.

Jean also a three-sport athlete in high school and attended St. Joseph’s College of Beauty at Lincoln and at the present time owns her own business in Oakland. She and her husband Todd have four children.

Robb was a four-year letterman in three sports in high school. He was a two time State Champion in the 100 and 200-meter dash, State Champ once in the 400 relay and the long jump. All State in football, All Sports King, Shrine Bowl and class valedictorian. Walked on at UNL in football later earning a scholarship and a starting spot at split-end for two years and lettering for three. He was Big 8 punt return champion in 1985 and was Academic All Big 8 in ‘85 and ’86. He now works as a physical therapist in Central City. Robb and his wife Tina have four children.

Craig was also a four-year letterman in football, basketball and track. He was first team All State in football ’82, first team All State in basketball ’82-’83, quarterbacked the State Championship football team ‘81,and was a member of the ’81 and ’82 State Championship track teams. He played in the ’83 Shrine Bowl as quarterback and kicker. Went on to UNL where he played football lettering in ’87 and ’88. Returned to his alma mater to coach basketball and football, taking his ’99-’00 basketball team to the State Tournament. Craig now coaches at Kenesaw and he and his wife Julie have three children.

Linda was a four-year letterman in basketball and track and three years in volleyball. She was All State and All Tournament in basketball playing on two State Championship teams. Linda was a four time State Qualifier in track winning the long jump once and placing three times as well as placing three times in the hurdles and the 400 relay. At Wayne State she lettered four years in basketball and track where she gained All American honors in both. She holds 14 school records in basketball and two records in track at Wayne State. Qualifying for the Nationals four times, she placed sixth in the long jump in ’89. Other honors include World Herald College Athlete of the Year and Academic All American. She and her husband Drew have four children and she now teaches and coaches at Wahoo.

Mary played on three straight State Basketball Tournament teams. She was a four-year letterman in basketball and track making the All State Team once and All Conference once. She qualified for the State Track Meet all four years in the 1600 and 3200 meter runs. Attending Wayne State she played basketball for four years becoming the 5th all time leading scorer in Wayne State history and was selected All Conference. She participated in track for three years. She was chosen Athlete of the Year her senior year. She won the Miss Nebraska Pageant in 1993 and went on to compete in Atlantic City at the Miss America contest. She now works as a registered nurse at Bryan LGH Medical Center East in Lincoln. She and her husband Rick have one child.