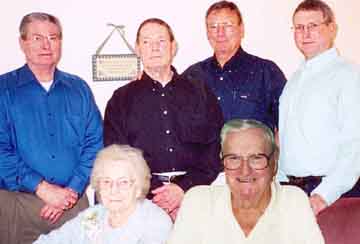 Schuyler Chester and Ruth Bailey had four sons — Keith, Gary, Don, and Steve — who gave years of time and dedication to the student athletes of Nebraska and Iowa. The brothers are graduates of Schuyler High School and attended either Wayne or Midland where they received their Bachelors degrees and launched careers in the teaching and coaching profession.

By the time their coaching careers ended in 1999 they had a total of 117 years of directing the athletic endeavors of high school athletes. In 1978 Gary and Don became the first brothers to coach in Nebraska Class A schools at the same time. Keith added to the big-school coaching family when he took the head job at Ames (Iowa) Central.

Gary was a three-sport athlete at Schuyler, earning nine letters. The Wayne State grad took his first job at Falls City coaching football, basketball, and track. Four years later he moved to Weeping Water taking the football and track jobs. In 1969 moved to Omaha Central where he coached football and track for 10 years. He then coached at Omaha South for one season before taking the football job at Omaha Bryan in 1980. He was Metro Assistant Coach of the Year in 1990 and has worked 26 years at the state track meet and 12 at the state soccer meet. Retiring in 1998, he had a total of 36 years of teaching and coaching. His son Marc lettered two years in football and basketball at Burke High, and Michael lettered four years in football and soccer. Michael was first-team all-state soccer for three years, the first and as yet only Nebraska high school player to receive this honor. Making the state track meet a real family affair, Marc, Michael and mother Merlyna assist Gary in running the triple jump event.

Don was a member of Schuyler’s undefeated football team in 1960 and the ’59 state championship team. After graduating from Wayne State, he took the head football coaching job at Millard High from 1966-1983. He moved to York High as athletic director from 1983 until his retirement in 1999. During his coaching tenure he was assistant Shrine coach in 1974 and the South Head Coach in 1976. He was selected District II Athletic Director of the Year in 1999. His two sons were also multiple sport athletes. Ty lettered three years each in football and basketball before attending Rice University to play football. Son Bret lettered three years in football and two in basketball. Keeping up what appears to be a family tradition, Don has logged 10 years as a state track meet official.