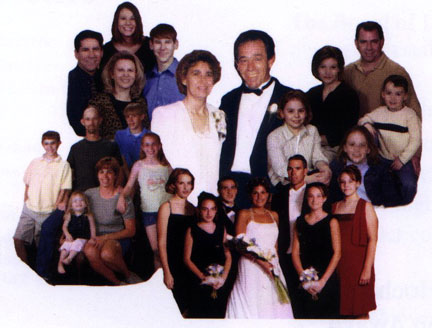 Back in mid-1950’s, collegian LeRoy Hoehner, a star athlete at McCook Junior College, fell in love with the head cheerleader. LeRoy and Patricia later married and together raised a family which stands for everything good in high school activities.

LeRoy taught and coached at Overton, Bertrand and McCook high schools. At Bertrand, head basketball coach Hoehner enjoyed a 293-97 record and Class C state runner-up finishes in 1966, 1967 and 1973. Patricia was a coach, too, varsity volleyball in 1957-59 while they were at Overton.

Once into administration, LeRoy became the superintendent of schools at Bertrand and served in various capacities with the Nebraska School Activities Association, including being chairman of the NSAA board at the time of his death in 1995.

Oldest son Kyle was a standout athlete at Bertrand–4-year letterman in basketball and track and 3 years in football. He set Bertrand records for assists in a season and assists in a career in basketball. In track, he was a state runner-up in the vault. In addition to high school sports involvement, he was on the state champion Bertrand/Loomis American Legion baseball team in 1977. Kyle graduated from Kearney State and embarked on a basketball coaching career at Kearney High School, becoming the head coach in 1986. His Bearcats went to state seven times, got to the state semifinals 3 times and won six district championships. In 1998, Kyle was named coach of the Nebraska Coaches Association All-Star Team, an honor that came 25 years earlier to his father.

Kelly was a star athlete at McCook High School–3 letters in football and twice all-conference, district champion and state meet qualifier in the pole vault. Actually, his acclaim in athletics came much earlier when, at age 12, he set a national record in the vault at 11 feet, 8 inches. He lettered in baseball at Kearney State.

Chris emerged at McCook as one of Nebraska’s all-time jumpers, winning the all-class gold medal in the triple jump in 1981 and 1982 and the long jump in 1981 at the High School Track and Field Championship. He also was the Class B state champion in the long jump and 100 dash in 1982. By the time he was graduated, he had his name in the McCook High School record book in the long and triple jump, 100 dash and 400-meter relay. In 2004, he had the distinction of still ranking third in the all-time high school triple jump standings. He also lettered 3 times in football and was all-Big Ten as a defensive back/running back. In basketball, he lettered twice. Chris went to the University of Wyoming and placed three straight years in the Western Athletic Conference indoor and outdoor meets.

Carrie, the only daughter, also ranks as one of Nebraska’s all-time leaders in track. She was a four-time qualifier for the state track meet. She won 11 Class B gold medals in the 100, 200, long jump and 400 relay and won the all-class gold medal in the long jump in 1987. Her long jump performance rated as the best in history. She was a 3-year letterman in both volleyball and basketball as well. At the University of Nebraska at Kearney, Carrie earned five all-America awards and set school records in the 60, 100, 200 and long jump.