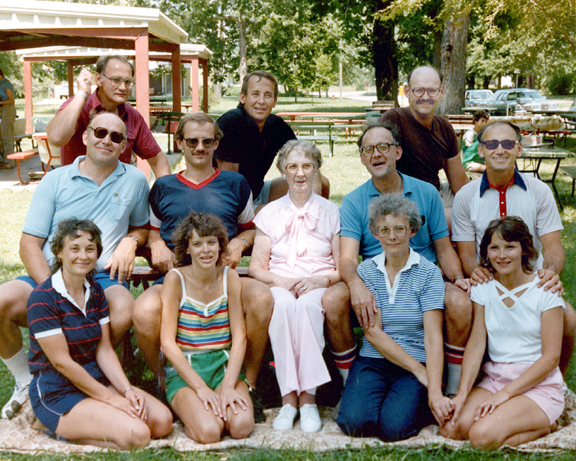 Scribner…250 High School Letters, 34 All-State Awards, 50 College Letters…
The family of Leon and Mayme Dostal of Scribner and the families of their children, Bob, Larry, Ken, Norm, Rich, Dave, Don, Irma Dostal, Mary Ann Johnson, Janet Bailey and Rosie Hanna are honored as the 2005 Hall of Fame Family.
Sports have been, and continue to be, the recreation and vocation of the Dostal family for many years.

Ken, who was a two-time all-state selection in football and basketball, was offered a contract by the Denver Broncos. Norm has coached youth football. Rich and Dave had standout football careers at Kearney State College. Larry played college basketball at Norfolk Junior College and the University of Nebraska at Omaha. Bob, the oldest, still enjoys playing basketball, while the others remain active in other sports.

The second generation has been just as successful. Scott and Shawn, Ken’s sons, played football for the Nebraska Cornhuskers, while their brother, Dan, played at Iowa State. Shawn and Dan went on the play in Berlin in the World Football League. Shawn also played for the U.S. Olympic handball team.

Jay, Dave’s son, played football for four years at the University of Nebraska at Kearney.

Pam, Bob’s daughter, was the first female from Midland (Mich.) High School to receive a college basketball scholarship, while her sister, Marcie, was a scholar athlete on the Purdue University swim team.

Terry Hanna, Rosie’s son, is the director of the Omaha Cox Classic golf tournament and has worked on many other charity sporting events.

As a group, the Dostal family has nearly 250 high school letters, 34 all-state honors and 50 collegiate letters.

Generations of dedication to athletic excellence earned the Leon and Mayme Dostal family of Scribner a prestigious accolade, as the family was awarded the 2005 Nebraska High School Sports Hall of Fame’s Fischer Family award at the organization’s 12th annual induction ceremony recently.

Beatrice’s Rich Dostal, one of 11 brothers and sisters in the family, was on hand to receive the award. ”We’re just humbled and honored to be recognized among some of the best athletes in the state of Nebraska,“ Dostal said.

Dostal said the value placed upon athletics while he was growing up was considerable from the start.

”My inspiration in sports came from my older brother Ken,“ Dostal said. ”Our father owned a tavern and he was busy earning money to put the food on the table, so I always looked up to Ken.“

Dostal said his earliest memories involve participating in sporting events at the family’s acreage outside of Scribner.

”We converted the barn’s hayloft into a basketball court, with free throw lines and lights, and we were usually up there playing until 11 or 11:30 at night,“ Dostal said. ”Dad was kind of upset that we burned lights at that time, but we did it anyway.“

While his father wasn’t always happy with the late night games at home, he was an avid supporter of the children when they participated in their school’s athletic events.

”My dad really enjoyed sports and was always at those games of ours,“ Dostal said. ”My mother didn’t always get the opportunity to attend games because she was busy raising 11 kids and helping out at our family’s tavern, but once we grew up and had children of our own, she made it a point to go support them.

”She probably attended more of her grandchildren’s games than she did of her children’s.“

Of course, there were a lot more games that involved her grandchildren than involved her children as the Dostal family has now amassed 250 high school letters, 34 all-state team members and 50 collegiate letters.

The family’s sports background was shaped by its hard work ethic, which the kids learned from their parents, Dostal said. ”We grew vegetables at home and worked in the bar, cooking, serving meals and cleaning,“ Dostal said. ”Hard work was important in family life as well as in our sports competition.“

Dostal excelled in football, basketball and track at Scribner, which were the only sports offered at the time.

Scribner was primarily a ”basketball school,“ Dostal said, but he and his brother Dave played on the first Scribner football team to win a trophy, the 1961 Husker Conference championship.

Sports continued to be a major influence in Dostal’s life as an adult, as he volunteered to coach his children’s teams and volunteered to help run track meets.

Dostal said the role of parenting changed greatly during the time between when he was a child and when he was raising his children, Jennifer and Jake.

”Parental involvement in sports did not occur when I was growing up,“ Dostal said. ”My parents opened the bar in the morning and closed it at night, so we learned from our brothers and from our coaches.“

By the time he started raising children, Dostal said parents’ participation in their children’s athletics program was much more commonplace. ”I coached Little League teams, Y (YMCA) leagues and volunteered as a coach,“ Dostal said. ”I became involved in it.“

Dostal said the most important lessons he was taught and passed on to his children transcended action on the court.

”I always told my kids that if they didn’t succeed at first, to keep on trying, to never give up,“ Dostal said. ”If you’re going to start something, finish it, at least until the end of the season.“

Commitment to your team and to improving yourself as a teammate and player were also focuses. ”You have to work hard at what you do,“ Dostal said. ”There’s no room for taking it easy and quitting if you don’t like it.“

Dostal continues to be active in volunteering, as he’s worked every state track meet that has taken place at Omaha Burke. ”I was teaching at Omaha Burke when it started there in 1971 and have helped with the discus (competition) ever since,“ Dostal said. ”This year will be my 35th year working the state track meet, and I will have worked 14 Willis Jones meets (in Beatrice), after this year’s.“

Dostal also officiated high school football off and on for 20 years before retiring from that duty last season.

Today, Dostal still has a spark for sports like hunting and fishing, but only gets in some court time during his family’s reunion each year. ”Each year we have a basketball tournament at our family reunion,“ Dostal said with a grin. ”It’s mostly the kids that play now, but some of us old-timers still get in there and go at it, three-on-three.“