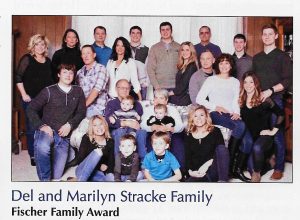 Small towns can produce big influence on high school athletics, and the Del and Marilyn Stracke family of Stuart proved that.  Three daughters and two sons have played, coached and won on the biggest stages, starting with their youngest daughter, Darcy is the leading scorer in basketball and a Hall of Fame inductee as an athlete in 2011.  She went on to star in college and coached state volleyball champions in Montana.  Sisters Stacey and Sandy, standout high school and collegiate athletes, as well as brother, Jerry, have enjoyed successful coaching careers as well.  Each have taken their teams to the Nebraska state tournament multiple times, with Jerry winning five girls’ basketball titles with West Point Central Catholic Guardian Angels.  Sandy’s husband John Miller, has surpassed the 700-victory plateau an has achieved the rare distinction of coaching state champion girls’ and boys’ basketball teams.  He was inducted into the Hall of Fame as a coach in 2017.