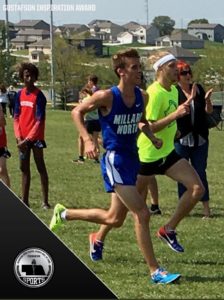 Alex was diagnosed in his teenage years with Retinitis Pigmentosa, which causes vision impairment.  He participated in Cross Country and Track all 4 years of his High School career at Millard North.  During his freshman year it became a slight issue and in 2017 his vision became notably worse which caused him to run off course and not be able to avoid obstacles on the 3.1 mile course.  It became evident he would need assistance to continue running safely.  The Nebraska School Activities Association was contacted and they granted permission for Alex to have a guide runner, Tim Grundameyer became that individual.  Alex is currently a sophomore at Midland University, and Tim continues to run with him.  Alex was a National Qualifier last May in the Marathon held in Gulf Shores, Alabama.