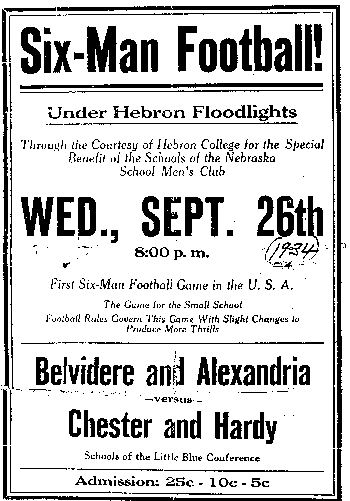 for the love of the game

On a steamy Friday night in the Texas Panhandle, six players huddle under stadium lights in Follett (pop. 412) before quarterback Cade Carter takes the snap and fires a pass downfield to Luke Lobmeyer. The speedy receiver weaves past three defenders and dashes into the end zone, drawing cheers from the hometown crowd of 300 as Follett High School edges past rival Vernon Northside, 55-48.

“That’s the mark of a championship team!” yells Follett head coach John York minutes later as his Panthers hold off a comeback drive for the victory.

Follett’s post-game celebration would not have been possible if not for six-man football, a scaled-down version of the game that offers a gridiron alternative for high schools in mostly rural America where student enrollment often is too low to field traditional 11-man squads.

A product of the Great Depression, six-man football was developed in 1934 in Chester, Neb. (pop. 294), when teacher Stephen Epler wanted the boys at his high school to experience the game. “They thought it would save on equipment and would give youngsters in smaller schools the opportunity to play,” says Reuben Schleifer, 87, who coached the team in Chester in the 1940s and ’50s.

Epler, who was inducted into the Nebraska High School Sports Hall of Fame in 1995 before his death two years later, created a rapid-paced game that reduces the 100-yard field to 80 yards, requires 15 yards instead of 10 for a first down, and elevates the importance of small, quick players, with all six team members eligible to receive a pass.

In a word, the game is speed.

“It’s like a track meet,” says Taylor Northern, 18, a Follett player who graduated last spring. “You have all this open field to run on.”

“Conditioning plays a huge role in six-man,” adds York, 44, now in his fourth year as head coach at Follett, which dresses out 17 to 20 players among the school’s 65 students.

Receiver/cornerback Justin Hernandez, 18, calls six-man a game of high scores and high stakes. “In 11-man, if you miss a tackle, there’s someone behind you. In six-man, if you mess up, it’s all open field and a touchdown,” says Hernandez, another 2009 Follett graduate.

Taking the field
The first six-man game was played on a September day in Hebron, Neb. (pop. 1,565), in 1934—on a field with no goalposts and using shoulder pads and helmets borrowed from a local junior college. With Epler on the sidelines, the game paired the towns of Chester and Hardy (pop. 179) against neighboring Alexandria (pop. 216) and Belvidere (pop. 98), ending in a 19—19 tie.

“To us, it was an exciting game and it was a good game,” recalls Bill Cramer, 89, who played as a high school freshman in the inaugural contest alongside his brother Robert. “It was wide open, lots of passing. Everyone was eligible to catch a pass. Every young man in every grade who wanted to play could be on the team. It gave the community a focal point.”

Cramer, of Lynnwood, Wash., is a 1938 graduate of Nebraska’s Hardy High School, which enrolled 77 students at the time. “They were lucky if they could get 12 kids to turn out,” he recalls of the team’s recruitment efforts.

More than 70 years later, in addition to its stronghold in Texas, six-man football is played by 12 schools in Nebraska, 28 in Montana, 21 in Colorado, 10 in Wyoming and nine in New Mexico. The trend toward school consolidation in the West’s rural areas is changing the game’s landscape, however, requiring a school to play either eight-man or traditional 11-man when enrollment exceeds 99 students. Eight-man is played primarily in Arizona, Florida, Idaho, Kansas and Oklahoma.

A Texas institution
In the Lone Star State, however, six-man is a growing sport.

Populations of some farming and ranching towns have declined in recent years, forcing schools to shift from 11-man to the six-man game. “As rural Texas towns grow smaller, six-man football gets bigger,” says Carlton Stowers, 67, author of Where Dreams Die Hard, a 2005 book about the six-man team in Penelope, Texas (pop. 211).

Texas has 126 public schools playing six-man and a growing roster of private schools, according to Granger Huntress, founder of sixmanfootball.com, who expects up to 100 private schools to field teams this fall, compared to 78 in 2006.

The on-field action is just part of the story, however. The long distances that teams must travel to play other six-man squads is the biggest challenge. Follett, which is the northernmost school in Texas, is a good example, logging a 600-mile round trip to play one opponent. “Last year our travel budget was pushed to the limit,” York says.

The rewards of excelling on the field take a different path as well. Colleges offering athletic scholarships seldom recruit even the best six-man players. Some critics call six-man second-class football—a kind of street ball on the gridiron that can’t compare to 11-man’s reliance on strength, strategy and play calling. Thus, six-man players compete for the love of the game, pulling on helmets, pads and cleats for hometown pride and a shot at a state title.

“Heart—you’ve got to have that will to win in six-man,” says Jon Wells, 19, a Follett graduate who played in last year’s win over Vernon Northside before advancing to the Texas Six-Man Division I State Championship game in December, which Follett lost to Strawn (pop. 739).

Still, to the residents of Follett, players and coaches are local celebrities, and the six-man game is what football is all about.

“That’s how we entertain ourselves,” says Jerry Robertson, 74, who has followed the Follett team for nearly half a century. “We don’t have a movie theater. We don’t have a grocery store. We don’t have anything but each other. The passion here is to win and be better.”