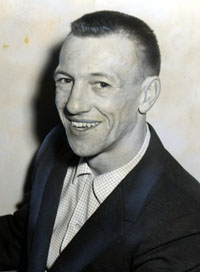 Athete, Coach.  Attended Wayne High ’42-’44 and Wayne Prep from ’44-’46 where he lettered in football at both schools, making the six man All State in 1945’ much the same in basketball playing on the Class B state runner-up team in 1944 and the 1946 state meet semifinals team at Wayne Prep in 1946.  Wayne State from 1946-’50, where he was a four year letterman in football.  He was twice selected the All Conference team as a halfback both junior and senior years, and team captain his senior year.  Al was the leading scorer in the conference his junior and senior years. Lettered four years in basketball.   Masters Degree at the University of  Wyoming.

Came to Fremont H.S. in 1957 as Head Basketball Coach and held that job until 1976.  His other duties included Head Golf Coach for 11 years, Assistant Football Coach for 15 years, Athletic Director from 1976 to 1989.  He coached his golf team to a State Championship in 1958 and his basketball team was 1961 Class A State Champion.  His basketball teams were also twice conference champions and seven times district champions.  Elected to the Nebraska Football Hall of Fame in 1996.