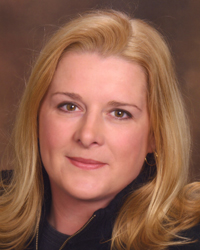 lass of 1990
Athlete
Amy Paulsen-Spiering is the standard by which Nebraska weight throwers are measured. Paulsen-Spiering won seven gold medals at the state track and field championships. As a freshman, she won the Class A discus and placed second in the shot put at Norfolk.. The next three years, competing for Norfolk, Ralston and Oakland-Craig, she won the all-class gold medal in both events. She set a state record in the shot put with a throw of 48 feet, 1 inch, and threw the discus 155-0 feet. Her efforts in both events put her in the top five nationally, and she competed in the Keebler Invitational and Arcadia Invitational national meets. In college, she competed at Texas A&M, Missouri and the University of Nebraska at Omaha, earning Division II All-American honors in the discus in 1996. She set school records in the discus as well as the indoor shot put and discus at UNO and the indoor shot put at Texas A&M.