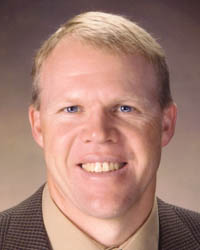 Athlete. Class of 1989. Few have mastered an event as well as Andy Meyer. From the state record in high school to three-time All-American honors in college, to a successful collegiate coach, Meyer made the discus ring his specialty. A high school football player at Superior, asked to walk on at Nebraska; three-year letterman in basketball; It was track where Meyer awed those who saw him compete. He won the Class B gold medal in the shot put as a junior, then threw a state-record 203 feet, 6 inches as a senior – a mark that still stood at the time of his induction 20 years later. At Nebraska, he was a three-time Big 8 champion in the discus. He competed in the World University games in 1993 and the Olympic Trials in 1996. He also was a two-time Big 8 shot put champion. H was named the head track coach at the University of Nebraska at Kearney in 1999 where he coached several national champion throwers.