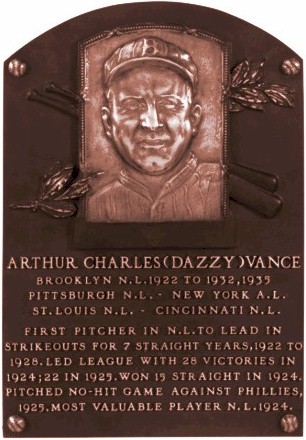 Athlete–Along the southern border of Nebraska in Webster and Nuckolls Counties once existed Cowles High School and Hardy High School. One exposed to this early 20th century secondary education was a late blooming great baseball pitcher, Dazzy Vance. Arm troubles hampered his rise until his early thirties when he started in 1922 with the major league Brooklyn Dodgers. In 1924 he was named the most valuable player in the National League, winning 28 games as a pitcher. Later he was also a member of the 1934 World Series Champion St. Louis Cardinals “Gashouse Gang.” Vance told media covering major league baseball about his nickname. “It had nothing to do with ‘dazzling speed’ as most fans believe. Back in Nebraska where I grew up, I knew a cowboy who, when he saw a horse, a gun or a dog that he liked, would say ‘Ain’t that a daisy,’ only he would pronounce ‘daisy’ as ‘dazzy.’ I got to saying, ‘Ain’t that a dazzy,’ and before I was 11 years old, the nickname was tacked on me.” Elected to baseball’s Hall of Fame in 1955, this talented Nebraskan deserved not to be forgotten.

Vance didn’t win his first game in the majors until after his 31st birthday – yet he went on to 197 wins, a no-hitter, and an MVP award. Vance won the initial NL MVP Award in 1924, leading the NL with 28 victories, 305 complete games, 262 strikeouts, and a 2.16 ERA. He outpolled Rogers Hornsby, who that year had set a major league record with a .424 batting average, because one voter failed to place the latter on the ballot. Vance used the award to negotiate a highly publicized three-year contract worth $47,500 from Brooklyn owner Charles Ebbets.

Vance began his professional career in 1912, but struggled with his control  and a sore arm until breaking through in the majors in 1922.

In 1922, Vance went 18-12, led the National League with 134 strikeouts and tied for the league lead with five shutouts.

1924 would see him second to no one: He compiled a 28-6 record, winning 15 in a row in one stretch, posted a 2.16 ERA and struck out an impressive 262 batters, earning pitching’s triple crown and the first MVP Award given by the National League. His 262 strikeouts were the most by an NL pitcher since Christy Mathewson fanned 267 in 1903 and would remain unsurpassed until Sandy Koufax struck out 269 in 1961.  No pitcher in history can claim such strikeout dominance. In fact, he was so dominant that he edged St. Louis second baseman Rogers Hornsby for the Most Valuable Player award, despite Hornsby’s .424 batting average-a 20th century record.

After three stellar seasons in the big leagues, Vance held out for more money and finally signed a three-year deal worth $47,500 in mid-March of 1925.  He rewarded Brooklyn by pacing the NL with 22 victories, 221 strikeouts and four shutouts in 1925. He struck out a career-high 17 batters against the St. Louis Cardinals on July 20 and no-hit the Philadelphia Phillies on September 13.

1928 would prove to be Vance’s last great all-around season and would usher in one last hurrah for his strikeout dominance. He went 22-10 with a league-leading 2.09 ERA, four shutouts and 200 strikeouts.

His run was coming to an end but Vance was earning the highest paycheck in baseball among pitchers, pocketing $20,000 in 1928 and $25,000 in 1929 when he won 14 games and struck out only 126 batters. It would be the first time he hadn’t won the strikeout crown in eight years.

He won his third ERA title in 1930, posting a 2.61 mark, which was an incredible 2.36 runs lower than the league average and more than a run lower than runner-up Carl Hubbell, who fashioned a 3.71 ERA for the New York Giants.

Vance made his only World Series appearance with the “Gashouse Gang” Cardinals in 1934, pitching alongside Dizzy and Daffy Dean. The 43-year-old threw an inning and a third of shutout ball for the Cardinals in Game 4-three of the four outs he recorded were strikeouts-to earn a World Series ring.