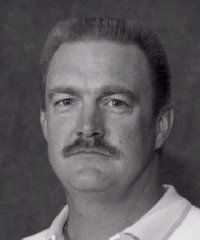 Athlete. 1974. Made his mark early at Omaha Burke High School, cracking the starting lineup in 1971 and keeping his spot three years. All-Metro. All-State, 1974 Shrine Bowl. He was also on the varsity basketball team three years, starting as a junior and a senior.  In track, he threw the shot and discus and qualified for the state meet as a senior.  At University of Nebraska, he played football: back-up center and special teams as a soph, Blackshirt defensive tackle as   a junior, offensive guard and outstanding senior lineman in 1978, selected for the East-West all-star game and the Challenge Bowl. Third round NFL draft pick in 1979 by Cincinnati. Traded to St. Louis after one year. Retired after four NFL years because of five knee surgeries. In 1987, Coach Tom Osborne invited him into the NU program as a graduate assistant. Became head coach at Hastings College in 1995, winning the conference championship his first year.  Assistant head coach at New Mexico State in 1997. Head coach at Iowa State. Mainstay on Nebraska coaching staff for several years.