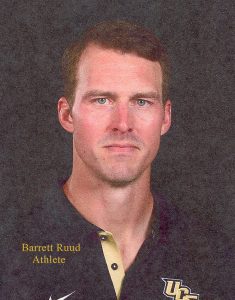 Lincoln Southeast (Class of 2001)
Touchdowns highlighted Barrett Ruud’s football career before tackles made him a pro. The cornerstone of three Lincoln Southeast state football championships, Ruud made the Knights varsity as a freshman, started as a sophomore and set school career records with 2,988 rushing yards and 54 touchdowns. The Lincoln Journal-Star’s Athlete of the Year in 2001, Ruud was a three-year letterman and a two-time all-state honorable mention all-state selection in basketball. A third-generation Husker football standout, he was a 4-year letterman at linebacker, setting a single-season and career record for tackles. He went on to play eight years in the NFL, making more than 100 tackles in half of those years.