Golden Anniversary Team: Holdrege basketball and golf, 1967. The Dusters went 23-1 in basketball, losing only to Grand Island, one of eight Class A games on their schedule. They defeated Schuyler’s “Jolly Green Giants” 66-54 in the state final. In golf, the Dusters shot the lowest single-round Class B score (237) to date while winning the first of back-to-back state titles. 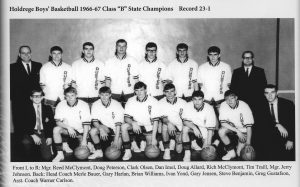 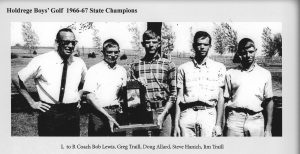