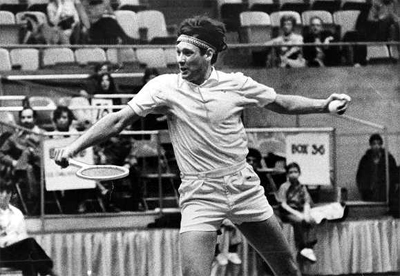 Athlete.  Perhaps no Nebraska high school athlete dominated a sport the way Bill Brown dominated tennis.  A 1963 Omaha Creighton Prep graduate, Brown was undefeated in his high school career, winning the city and state singles championships four consecutive years from 1960 to 1963.  In 1960, Brown was ranked as the #7 player in the nation in boys’ singles.  He won the National Junior Indoor Doubles championships in 1962 and 1963 and was awarded the Bill Talbert Sportsmanship Award at the National Junior Championships in 1963.  Following his spectacular prep career, Brown accepted a tennis scholarship to Notre Dame, where he became the team captain and #1 singles player, and won All-American honors in 1967.

Brown went on to successful career in professional tennis, competing against many of the superstars of that era, including Rod Laver, Stan Smith, Arthur Ashe, Jimmy Connors, Bjorn Borg, John Newcombe, and Ilie Nastase. He defeated Nastase in singles and was ranked 84th in the world in 1975. During his professional career, he won six international doubles titles, competed at Wimbledon six times, and played in four other Grand Slam tournaments.  Brown enjoys the particularly unique distinction of having been one of the participants in the longest set of singles at the time in the history of tennis – a 36-34 match in Kansas City in 1968.