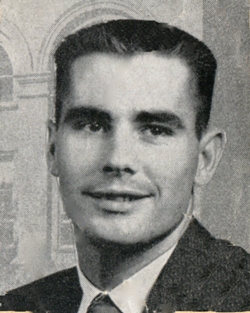 Bill Hawkins lived the life of a schoolboy superstar, graduating from Beatrice High School with four-year school scoring records in football, basketball and track. A high school All-American in football, he averaged just under 10 yards per carry his senior year. All-conference in basketball, he averaged more than 17 points per game as a senior. And in the 1952 state track meet, he completed his “Athlete of the Year” season by putting on a one-man show winning all-class gold medals in both hurdles races, winning the Class A shot put, tying for first place in the high jump and finishing second in the long jump. The state selective pentathlon champion, he went on to letter three years in football and track for the Nebraska Cornhuskers.