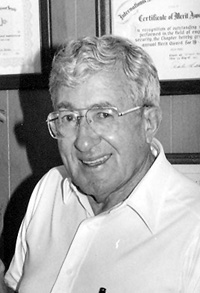 Contributor–Good sports writing is a good part of enhancing high school athletes in Nebraska. One of the major contributors over the years was this talented writer, known for painstaking accuracy, whether associated with the Hastings Tribune, the Gering Courier or the Scottsbluff Star-Herald newspapers. Covering sports was his number one priority and with much effort he became a noted historian of high school sports throughout the state over the years. If anyone had a question about Nebraska sports, Madden usually got a call. Most of the time he could answer it right off the top of his head. If he couldn’t, he had a library of newspaper clippings arranged in 300 books dating back to 1941. Madden made it a point to be informed. Certainly, Western Nebraska athletes could rest assured they would receive their fair share of publicity due to the calm, fair judgment of this respected sports scribe.

Nebraska lost one of its biggest sports fans Saturday.

For parts of seven decades, Bill Madden devoted himself to the game. He loved to watch and write about the contests played by boys and girls in Nebraska high schools.

Along the way, he earned the respect and admiration of coaches, athletes, teachers, parents and readers of newspapers -especially the Hastings Tribune, Scottsbluff Star-Herald and Gering Courier. He spent 46 years of his life at the three papers.

Madden died Saturday at the age of 78 in Scottsbluff.

Madden was a wealth of knowledge when it came to sports history in Nebraska. Even as his body failed him, his mind stayed sharp. Just a week and a half ago Tribune sportswriter Terry Douglass called Madden to discuss the 1954 Hastings High boys state basketball championship team.

Madden talked Douglass’ ear off with recollections. Madden was sports editor of the Tribune then. And he told the stories of 1954 like they happened yesterday.

Anyone who started talking sports with Madden knew they were in for a long conversation.

I called Bill last fall to discuss his induction into the Nebraska High School Sports Hall of fame.

Two hours later, I had four pages of notes with very little pertaining to the induction. That’s the way he was.

If anyone had a question about Nebraska sports, Madden usually got a call.

Most of the time he could answer it right off the top of his head. If he couldn’t, he had a library of newspaper clippings arranged in 300 books dating back to 1941.

Madden made it a point to be informed.

He said: “I always thought I needed to know more about my team than anyone else. There was no reason to go out there and cover them if I didn’t.”

Notice how Madden referred to the team as “his team”.

That was his way. His style of writing was down-home. the kind hometown fans enjoyed. Good news or bad news, folks knew they could count on Madden – just like a member of the family.

During our phone conversation, I asked Madden what he calls his hometown.

He paused and responded: “Every place I have been, I have called my hometown.”

Madden offered some other observations during our conversation:

– He said the dedication of old-time writers is not equaled today. Although I am a writer of today, I found it hard to argue.
– He said he never found much use for interviews. “The old-time writers went more for the contest,” he said. “Young writers today go for the social aspect.”
– He said being inducted into the Nebraska Sports Hall of Fame was one of the nicest honors he’d received, noting that he belonged to a trapshooting hall of fame and a wresting hall of fame despite the fact he had never fired a shotgun or wrestled.

The one aspect of athletics Madden didn’t care for was fans who criticized coaches, teams or players. “There’s always going to be that core of fans that don’t know what sportsmanship is,” he said.

Madden was a true sportsman. And generations of Nebraskans benefited from it.