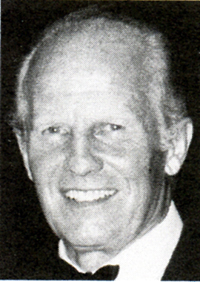 Athlete. An excellent example of the all-round great athlete, this graduate of York High School at the close of his senior year in 1944 had been all-state quality in three sports. He was a fleet-footed halfback for the York Dukes fine football team in the fall of 1943. During the winter and spring he led the York basketball team as their high scorer to the 1944 Class B state championship. In track & field, he won the l00-yard dash and high jump at the state meet. During his naval training he continued occasional competition, setting meet records at the Penn Relays in the 120 high hurdles. After World War II, he returned to Nebraska and lettered in football and track between 1946 and 1950 at the University of Nebraska. At one time he tied the world record in the 60-yard low hurdles. One of the speedier backfield men in history, it is no wonder his home town voted him York High School “Athlete of the Century” in 1973.