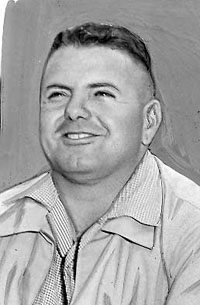 Coach–Inspiring respect as both an athlete and a coach, this likable coach and school administrator became a legend in Nebraska high school track & field by setting a state record in the shot put of 52’ 2” while competing for Lincoln High School in 1936. The record stood for 19 years. After World War II, in 1946, he returned to the famed Red and Black as a coach and proceeded to carve out an enviable record, especially during the 1950s. In 1951, 1952 and 1954 his football teams went undefeated as state champions and many regard his 1954 Links as one of the most dominating high school teams to take the gridiron of all time. In addition, as track coach his team won the 1951 track & field state meet. As a schoolboy, also at Lincoln High, Pfeiff excelled in football.