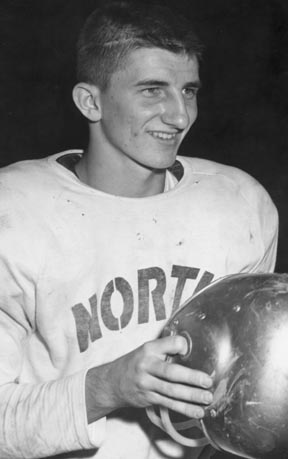 Quarterback of the Vikings’ fabled Four Norseman backfield in 1961 and 1962. The Vikings were 9-0 in 1961. He was the Omaha high school athlete of the year in 1962. He starred in football, basketball and baseball.  He was twice all-city in baseball and played on the Storz American Legion team that went to the Legion World Series in 1961. He played in the 1963 Shrine Bowl and was Nebraska’s quarterback from 1964 to 1966, earning All-Big Eight honors in 1966.  He set 14 Cornhusker passing records. He was an All-American baseball player in college, the Big Eight batting champion  in 1965. He turned professional with the Athlanta Braves. He also played semi-pro football for the Omaha Mustangs.