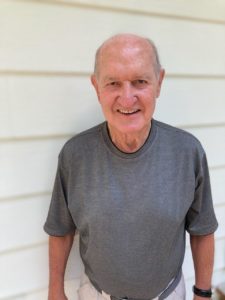 One of Omaha Tech’s all-time greats, Bob stood out among them all.  In basketball, he made the starting five as a sophomore, led the team in scoring as a junior, and was the second leading scorer as a senior.  On the baseball diamond, he started for four years, earning All-City honors as a senior and led the league in base hits. Recruited by Creighton, Omaha University and others, he opted to play both sports at Omaha University.  Forced to give up baseball after starting at second base his freshman year  to work and help his family, he stuck with basketball, scoring an incredible 1,259 points in his career.  He was the team captain for the first Omaha University team to defeat Creighton.  After college, he became a successful basketball coach at Ralston High School and was the Athletic Director at Omaha Northwest.