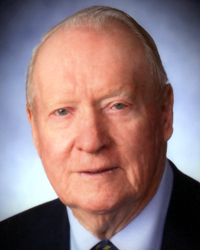 Robert Murray displayed his devotion to high school sports first as a successful coach and then as a historian, organizer and volunteer. His coaching career included whistle stops at Fort Calhoun and Omaha South before he returned to his alma mater, Omaha North, in 1962, where he coached golf and basketball until 1992. He also contributed to Omaha North by compiling a book documenting the history of the school’s athletic teams with results and records dating back to 1924. He organized displays of all the school’s trophies, memorabilia and record boards when the new athletic facility opened in 1993, and he continues to update the records. Omaha University’s only athlete to letter in two sports in one season, playing baseball and golf at the same time, he organized the first state girls golf tournament and was the director of many Metro Conference and NSAA state and district events.