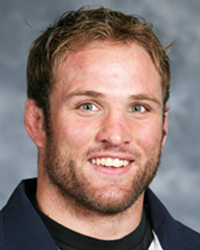 Class of 1996
Athlete
Brad Vering’s road to the Olympics took off while winning three state championships at the Nebraska High School Wrestling Championships. Wrestling for the Howells Bobcats, Vering set a state record with 10 state tournament pins. He finished third as a freshman before ascending to the gold-medal level, finishing his high school career with a 148-2 record. At the University of Nebraska, he won the NCAA national championship in 2000, earned All-American honors three times and was a two-time Big 12 Conference champion. In international competition, he found his niche in Greco-Roman wrestling.  He represented the United States in the Olympic Games in 2004 in Greece and in 2008 in Beijing. He won the U.S. Nationals in 2004, 2005 and 2007 and was the Pan Am Games gold medalist in 2007. He was a silver medalist at the World Games in 2007 and a finalist for the AAU’s Sullivan Award for outstanding amateur athlete in 2008.