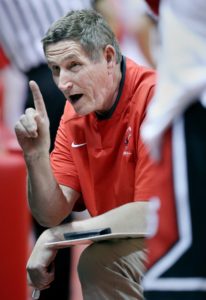 Bruce has coached his teams to many victories -whether in Class C or Class A, or in Iowa or Nebraska, Bruce has coached successful teams.  He has three Nebraska State Championships under his belt, one at Atkinson West Holt (1988), where his son was the leading scorer, and two at Omaha South (2016 & 2019).  He’s led two other teams to undefeated regular seasons (Atkinson West-Holt in 1989 and Council Bluffs Abraham Lincoln in 2001) only to have them get upset in the postseason. While Bruce’s longest tenure has been at Omaha South, his nearly 50 year career included stops at Omaha Tech, Sidney, and Glenwood, Iowa.