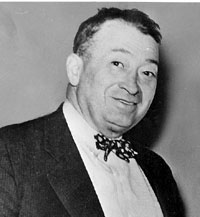 Coach–In the first half of the twentieth century, no Nebraska high school coach was a more successful example of great track coaching and promoting the sport of track and field. During his long career, while at Omaha Technical High School, his teams won six state track & field meet titles: 1932, 1933, 1937, 1941, 1943 and 1949. After he retired, for several years a relay event was hosted by Omaha Tech most deservedly in memory of his many accomplishments.