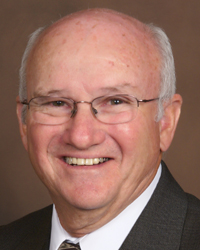 Charlie Moore’s 51-year coaching career, the majority of which was at Fairbury, included state championships in basketball and track. Moore started his coaching career at Snyder, then after one year, moved to Butte for three years where he coached football, basketball and track. He moved to Fairbury in 1967, forging a basketball powerhouse. The Jeffs won state championships in 1971, ’73 and ’78 and finished runner-up in 1983. His 30-year basketball coaching career, 26 as a boys coach and four years as a girls coach, resulted in 367 wins and 276 losses. He coached track throughout all 45 years of his career, 31 years as a girls coach and 14 years as a boys coach, and resulted in the 1988 state championship and the 1989 state runner-up trophy. He also coached wrestling for three years, leading Fairbury to a 12-0 dual record in 1968-69, and he was head football coach for four years.