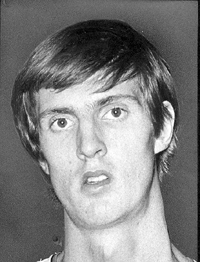 Athlete. This 1968 graduate of Schuyler High School received well-deserved plaudits from Nebraska newspapers as one of the best high school basketball players ever in this part of the country. In 1968, the year of the Class B state championship title for the tall green and white lads, Chuck Jura averaged 30 points per game in scoring. They were state runners-up a year earlier. Later at the University of Nebraska, Chuck Jura managed to record an average of 20 points a game one of his years, a rare and difficult feat in that tough conference. Following college he played professional basketball in Europe, but high school fans will not forget the years when Chuck Jura made the “Jolly Green Giants” of Schuyler High truly a happy crew to observe. He scored 1431 career points and built a reputation as one of the state’s best high school basketball  products. His feats lasted for years and year in the state tournament record book for the most points in a tournament (Class B, 1968), 109, and the most field goals in one game (B, 1968), 20.  His 201 career state tournament points was still in the top 10 in 2006. After a strong college career at Nebraska, Jura was chosen in the third round of the NBA 1972 draft by the Chicago Bulls.  Ultimately, he played pro basketball in Europe. He averaged 31 points a game for three-year-period in Italy.