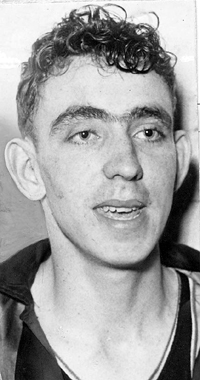 Athlete–A 1949 graduate of Hastings High School, a driving force for the Tigers basketball program, especially during his last two years with his all-state caliber play. In 1948 and 1949 Hastings High won 41 of 49 battles on the hardwood. This included a great victory over then long unbeaten Grand Island and runner-up at the state tournament at Lincoln in 1949. Later he was named All-American while at Hastings College, starring in both basketball and football. With his help, the 1954 Hastings College football team had its first undefeated season on over three decades.   Hastings High won 41 of 49 games in 1948 and 1949, with Chuck Stickels a great all-around contributor, especially as a scorer and rebounder. The Tigers ended the then state record 41-game winning streak for Grand Island and was state runner-up to Lincoln Northeast in 1949 in the state tournament finals. Stickels also played baseball for the Broncos and later signed a minor-league contract with the Chicago Cubs organization.  He was drafted in the 11th round by New York in the National Basketball Association. In 1964, he was inducted into the National Association Intercollegiate Athletics National Basketball Hall of Fame and in 1997 into the Nebraska Football Hall of Fame.