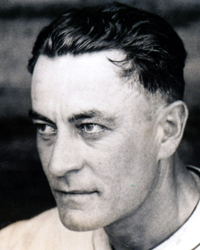 Called “the last left-handed spit-baller in captivity,” Clarence Mitchell pitched for six major league teams from 1911 to 1932, pitching in the World Series for the Brooklyn Dodgers in 1920 and St. Louis Cardinals in 1928. Mitchell was born in a sod house on a farm near Franklin, pretty much prior to organized high school sports. Throughout his pitching career, his substance of choice was slippery elm, obtained by chewing the bark of an elm tree he found growing along a creek near hometown Franklin, where his athletic skills came to the fore. He supplied bark from that tree to nearly 20 big-league pitchers allowed to throw spitballs after the 1920 ban. Considered a good hitter for a pitcher, Mitchell is known for being the only player in World Series history to line into an unassisted triple play during the 1920 Series with Cleveland.