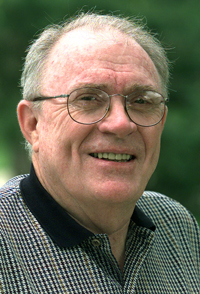 Contributor.  A faithful keeper of the lighthouse of Nebraska high school sports, this sports writer and association executive spent the better part of a lifetime supporting the pursuit of excellence in both academics and athletics. As a long-time sports writer for the Omaha World-Herald and Lincoln Journal & Star newspapers, his expertise was put to good use when he became a member of the executive staff of the Nebraska School Activities Association. Through his careful keeping of high school athletic records and tournament lore, the history of secondary education is enhanced by an accurate account of its athletic activities–developed/maintained records and state meet championship history in all high school sports and made information available to press and public via news releases, state tournament programs and through the NSAA internet website, which he developed. On the founding Board of Directors of the high school hall of fame.

Chapter out of a book aboout high school sports by Tad Styker.

If you like high school athletics, take a moment to cheer for Conde Sargent, because few have done as much for Nebraska prep sports.  Sargent, who graduated from high school in Indiana, will be forever linked to the Cornhusker State as a journalist, then as an assistant director of the Nebraska School Activities Association. He has written about, campaigned for, eaten, slept and dreamt prep sports.

He took the lead in promoting high school activities during the last three decades, and is one of the leaders responsible for Nebraska’s system of well-organized and well-run state tournaments.

Sargent was a prep sports beat writer with the Lincoln Journal-Star and the Omaha World-Herald. That included a stint as the World-Herald’s famous (or infamous) prep rater, a rather high-profile job in this state. Being the prep rater is somewhat like coaching–everyone is interested in your opinion, but they reserve the right to criticize it to the ends of the earth. It’s also like beekeeping–you’re likely to get stung every couple of weeks.

After leaving daily journalism, Sargent joined the executive staff of the NSAA, where he worked for 22 years. His efforts at getting information to the media in a timely manner have been remarkable. Time after time, he has gone out of his way to help players, coaches, administrators and members of the media, even when they were less than appreciative. Even heart surgery has not diminished his hospitable spirit.

“His dedication to the job stands out,” said Jim Riley, executive director of the NSAA. “The main thing he brought us is that he understands the necessity to publicize activities, and he brought the expertise to do it. The time of the day or the day of the week doesn’t matter to him. He just gets the job done.”

The game has not passed him by. Sargent stayed current. He was responsible for developing the NSAA’s efficient, informative website (http:www.nsaahome.org).

One of his favorite causes has been the Nebraska High School Hall of Fame. Sargent has championed that fledging organization, and now, fittingly, he has been enshrined it it. Even more fittingly, he was honored as a “contributor.”   Few have given more to the cause.

He retired in 1998, and the world of Nebraska prep sports will miss him.

Like many leaders, Sargent has had to weather some criticism with grace, but hopefully, he’s enjoyed a lot of sunny skies along the way. He left us with a much clearer view of the prep sports scene than we had before he came along.