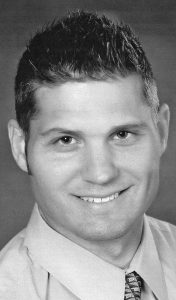 Cory Eikmeier covered a lot of ground in his high school football career – nearly five miles of running through, over, and away from opposing defenders. While leading Dodge to three consecutive Class D1 state championships, Eikmeier set five national records – points in a career (1,021), points in a season (448), touchdowns in a season (68), 100-yard games in a career (41) and consecutive 100-yard games (22). He set a state record with 8,763 rushing yards, including 2,965 yards in one season. He also earned all-state honorable mention playing on the basketball team that finished second in the state tournament. He went on to play football at the University of Nebraska at Omaha.