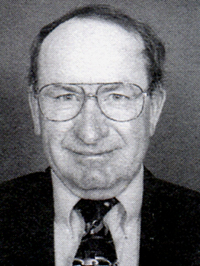 Coach.  The small town of Ansley can take pride in the number of fine athletes developed here near the edge of the great Nebraska Sand Hills. This is no accident, for they have been fortunate to have high school coaches of the caliber of Dan Moore. His thirty-four years of coaching were divided, four early years at Overton and then the last 30 helping the boys and girls of Ansley High School compete with the best of their class in a variety of sports. He has a football record of 255-83-2. Under his command, and his nickname is “Captain,” the Ansley boys won two state championships on the gridiron and nine times state runner-up in their class. In boys track, his teams were twice state track champions. While doing double-duty as track coach for the girls over nearly 20 years, the Ansley girls were state runner-up three times. There was no time off in the winter though, because he spent that time assisting in basketball.

Although Ansley football coach Dan Moore’s stellar career has come to an end, the awards for his numerous accomplishments haven’t.
This fall, Moore will be among the 20 inductees into the Nebraska High School Sports Hall of Fame. Also, on May 21, the retiring coach will be honored in Ansley with Dan Moore Day.

Moore is modest about his accomplishments over his 28 year career, which began at Overton and ended last fall with his final season with the Warriors.

“I’ve had good kids up here and stuck around a long time,” he said.

He has led his teams to two football state championships and nine runner-up finishes while compiling a 255-84-2 record. He has coached 22 all-state players. Moore has also coached two boys state championship and one runner up teams. He has led three girls track state runner-ups, had had 23 state track meet individual champions.

Moore is quick to share the credit for his Hall of Fame nomination. “It is a good honor,” he said. “But it means I’ve had good athletes. I didn’t win anything over the years. The kids did.

“I’ve also had a lot of good assistant coaches and good support from the community….”