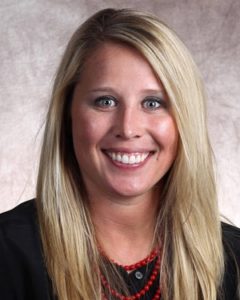 A true-three sport standout earning All-Class All-State Honors in volleyball and basketball and a hurdles champion in track, Dani committed to play volleyball for the Cornhuskers her sophomore year. She transitioned to outside hitter to a setter at Freeman, leading her team to the State Tournament semi-finals with a 29-2 record. She set a state record for ace serves in her career with 388, a mark that included a single match record of 11 aces.  In basketball, she scored 1,712 points, leading the Falcons to back-to-back State Championships and a 28-0 record her senior season. After winning the Class D 100 meter hurdles gold medal, she took her talents to Lincoln where she was a back row specialist, establishing a single season record for digs as a senior and earned the title of Big 12 Libero of the Year. An assistant coach for Nebraska’s 2015 National Championship team, she was named the head coach of Louisville in 2016.