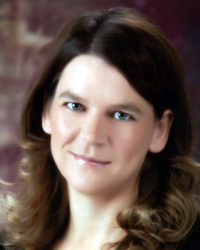 Chambers Class of 1996
Athlete
Darcy Stracke rewrote many record books in volleyball and track, but the most in basketball. Starting with her freshman year at Stuart High School, then the following three years at Chambers, Stracke led her teams to state titles all four years, averaging 30.5 points per game in the state tournament. She set Nebraska high school scoring records in a career (2,752) and a season (824 and 872), setting in motion an 87-game winning streak at Chambers. She also earned all-state honors in volleyball and was a Class D state champion in the 800-, 1,600- and 3,200-meter runs. As a college basketball player, she earned first-team All-America honors at the University of Nebraska at Kearney and the University of Nebraska at Omaha. In three years at UNK, she set the school’s single-season record for points (679), career record for steals (292) and a single-game record for assists (14). She set both schools’ single-game scoring records with 43 points, each record-setting effort at the others’ expense.