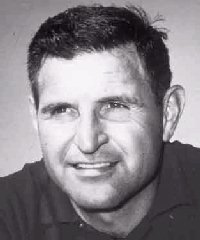 Coach.  Nicknamed “Dr. Victory” his career win record was 200-81-4 made him second only to Eddie Robinson of Grambling as the winningest Division 1-AA coach at the time of his retirement.  Darrell coached every level of the sport from peewee’s to high school, college and one professional team.  The 1946 South High graduate played his college sports at Peru State where he lettered in football, basketball, and track.  His first coaching job was at Tekamah where he coached all sports.  From there he went on to coach in college, starting at Huron, then Northern Colorado, Adams State, then North Dakota State.  He left the college scene in 1966 to give the pros a try coaching the Montreal Alouettes for one year.  In 1967 he returned to the college ranks heading the program at the University of Arizona.  From there it was to Western Illinois, Florida State, Eastern Illinois and finished at the University of Northern Iowa.   Darrell earned his Doctor of Education degree in 1965 at Northern Colorado U. , his thesis was “ Study of Current College Football Coaching Practices in Light of Selected Theories of Learning.”  This was later published in book form as Freedom in the Huddle, a psychology of coaching textbook.   Darrell retired from active coaching in 1988 and he and his wife now reside in Florida.