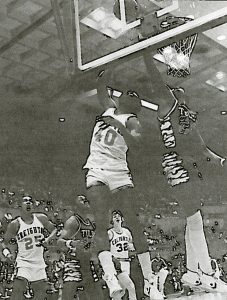 Bellevue West (Class of 1978)
A lock-down defender on the basketball court and a speedy outfielder on the baseball diamond, Daryl Stovall used his athletic skills to allow him to be selected by the Chicago White Sox in the Major League Baseball draft, and the San Diego Clippers in the NBA draft. At Bellevue West, he averaged 24 points and 11 rebounds as a senior all-stater. On the baseball diamond, he was a two-time all-state selection. At Creighton University, he continued to play both sports, setting a freshman home run record and averaging double figures in basketball his last three years. He signed with the Chicago White Sox before his senior baseball season.