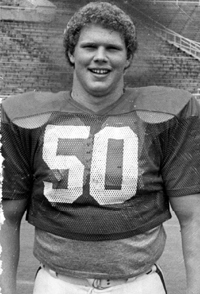 Athlete–One of the most highly regarded college football centers of all time, this 1978 graduate of Omaha South High School began his gridiron career as a youngster in the Pee Wee group also in that locale. He was a 6-3, 220-pound lineman who gained high school all-state honors and led South High to a 7-2-1 record in his senior year. Outstanding high school wrestler. As a University of Nebraska Cornhusker, he reached All-America status as a powerful center, finishing fifth in Heisman Trophy voting, most unusual for a lineman in 1982. After college, he played seven years of professional football in the NFL. An Outland, Trophy winner in college, this gentle giant has had his Nebraska football number retired by unanimous acclaim.

Few had the drive Rimington had in the weight room and the classroom. At UNL Rimington went from a “slow, practically skinny” lineman to a fast, hole-opening machine cutting his 40-yard dash from 5.35 to 5.05 from his freshman to his senior year, increasing his bench press from 340 pound to 435 and left Nebraska able to squat 650 pounds.

Equally as impressive was his skill in the classroom with a 3.25 GPA in economics as two-time, first-team Academic All-America and a National Football Foundation Scholar-Athlete.