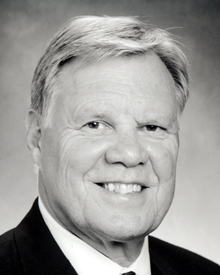 A former Colorado College football player from Mount Vernon, Iowa, Dave Van Metre was drafted by the Los Angeles Rams. After injuries ended his professional football career, he went into private business and has generously lended a hand to schools in Omaha and his native Mount Vernon. He has provided new weight training and cardio equipment to the Omaha School District’s seven high schools and 11 middle schools and to the city’s Boys & Girls Clubs. He also has spearheaded fundraising efforts for three high school stadiums and a number of baseball and softball fields. He has served on the board of directors of several Omaha foundations and has been honored by several schools for his assistance and support.