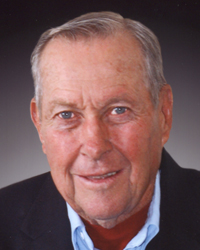 Class of 1949
Athlete
The Brady Eagles flew high with Dean Brittenham on the team. An all-state end, he led Brady to the six-man state title and a runner-up finish at the state basketball tournament where he was named to the all-class state tournament team. In track, he won the state pentathlon championship twice and helped Brady win the Class D state title. He won gold medals in the 120-yard high hurdles, the discus and the high jump. He lettered in track at the University of Nebraska then went on to be the head cross country and track coach at the University of Colorado. He also served as a strength and conditioning coach for the Minnesota Vikings, New England Patriots and Indiana Pacers and was a consultant for many other teams and organizations.