Athlete–Not far from the Big Nemaha River in southeastern Nebraska is the village of Burr. From this small place came a young man with a large talent who graduated from Sterling High School in 1979. Fortunately for Cornhusker fans, Coach Tom Osborne was astute enough to discover the talent and he encouraged Dean Steinkuhler to enroll at the University of Nebraska. The rest is history. From eight-man football roots, he became an All- American guard in 1983, winning the Outland Trophy and scoring on a trick play in the 1984 Orange Bowl. He was picked second in 1984 NFL draft by the Houston Oilers. Steinkuhler was named to nearly every All-American list in 1983, giving his hometown (population 110) the distinction of being the smallest town at the time to ever produce a consensus All-American. This outstanding lineman went on to play eight years of professional football with the Houston Oilers.

He followed fellow Husker Irving Fryar in the draft, marking only the second time in NFL history, and the first since 1967, that the top two players were from the same school.

Nearly 18 years later, Dean Steinkuhler can’t remember the actual name of the play that was called in from the sidelines that warm New Year’s night. Then again, the college football annals have since named it for him. It’s simply known as “fumblerooski.”

On Jan. 1, 1984, the All-American center Steinkuhler and his No. 1 Nebraska Cornhuskers found themselves behind 17-0 early to underdog Miami in the Orange Bowl. The Midwestern boys were noticeably tiring in the Florida heat, and the defense was proving no match for Bernie Kosar’s passing game. Nebraska needed to do something, and do something fast.

“We had worked on it all year in practice, once or twice a week in practice, but had never tried to use it,” said Steinkuhler. “When the play came in from the sideline, I was kind of shocked, but I just said, ‘Here we go.'”

The play, since banned in college football, involved quarterback Turner Gill leaving the ball on the ground as if there had been a fumble. Steinkuhler, the hefty lineman, picked it up and ran 19 yards for the touchdown to the amazement of 72,549 onlookers and, in particular, the television cameras.

“I think I showed my kids the tape a few years ago,” said Steinkuhler, “but it’s tough because (TV) didn’t get a lot of the play.”

Of course the Cornhuskers’ trickery couldn’t keep them from falling 31-30 in what was then considered a major upset. The Husker legacy that included Gill, Outland and Lombardi Trophy winner Steinkuhler, Heisman running back Mike Rozier and future NFL wide receiver Irving Fryar left school without a national title, but that couldn’t damper Steinkuhler’s time in Lincoln.

Steinkuhler’s next football game would take place with the NFL’s Houston Oilers, whom he played for through 1991. Though he enjoyed much success in the pros, it didn’t compare with college. He had been spoiled by Nebraska’s top-flight facilities, training and, of course, coaching. No one could compare with Tom Osborne, the Cornhusker coaching legend who retired last year. Dean Steinkuhler still follows his Huskers today.

“I was never around a guy who was more sincere or caring,” Steinkuhler said of Osborne. “We had 100, 125 guys on our team. I didn’t even know everyone’s name, but he did. And he knew something about every one of them, he knew where they were from, and, somehow, he always knew if they had a problem. He just had that sense, I guess.

“That’s why, when I got to the NFL, I found out it was definitely a business. It really soured me on the whole idea. I still watch a lot of pro football, but some of the coaches, especially, you question their integrity and, often, their intelligence. I could teach more in an afternoon than some of these people know.”

These days Steinkuhler resides in Syracuse, Neb., about 30 miles outside Lincoln, with his wife and three children. The self-employed Steinkuhler is a hard man to track down, as he spends his days operating a nearby car wash and renting home storage units, and his nights coaching his sons’ football teams.

The easiest time to locate him is probably Saturdays and Sundays, when he’s either in front of the television or in the stands at Nebraska’s Memorial Stadium. “You’ve got to understand, in this state on Saturday afternoons, that’s all there is,” he said.

Steinkuhler still follows the Huskers closely and is openly supportive of Frank Solich.

“Hopefully we’ll get a good 10, 15 years from him,” Steinkuhler said. “But then I’ve got a former teammate I’d like to see there.” Which teammate? None other than current Husker assistant and the man that “fumbled” that ball, Gill. 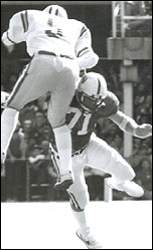