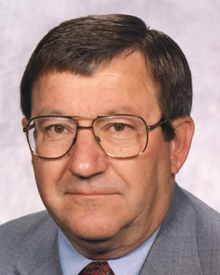 Del Schoenfish’s coaching career extended for more than 40 years. He coached at Valentine for five years before moving to Cambridge where he became a coaching icon, leading the Trojans to state championships in two sports. His teams drew praise for their preparation and the way they represented the school and community. He logged a career basketball coaching record of 522-231 that included one state championship and one state runner-up finish in nine state tournament appearances. The Trojans also won 10 conference titles under Shoenfish’s tuteledge. His golf teams qualified for the state tournament for 22 straight years, winning championships in 1996, 1997 and 1994 and finishing second in 1994.