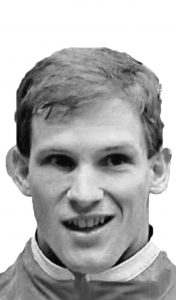 Dennis Harrison competed at the top of a very elite group of gymnasts, winning two state high school all-around championships and a total of nine state gold medals. For the Nebraska Cornhuskers, Harrison was an 11-time All-American and the 1994 NCAA all-around champion. A five-time Big Eight champion, Harrison and the Huskers qualified for the NCAAs all four seasons, earning runner-up finishes in 1992 and 1993 before winning the national title in 1994. He set the Husker record in the floor exercise (9.90) and his career-best all-around score of 58.50 ranked second. He competed for the U.S. National Team 10 times, winning the all-around bronze medal at the 1993 World University Games.