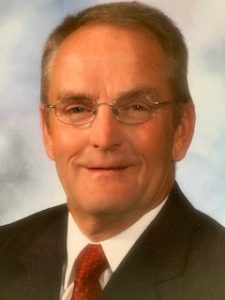 A prime example of a small-school, all-sport superstar, Dennis “Butch” Thorell proved premier athletes can come from anywhere.  A three-time All-State selection in football, Dennis led Loomis to back-to-back undefeated seasons his junior and senior years.  Naturally right-handed, he developed into a left-handed shooter and led the Wolves’ basketball team in scoring.  On the track, he was a State Champion in the hurdles and long jump, setting the Class D record in the long jump.  He also posted the best mark in the state, regardless of Class, in the hop, step and jump three years before the event entered the State Track Meet. In college, he played defensive back for the Nebraska Cornhuskers, playing in three bowl games.  A Vietnam veteran who earned a Bronze Star, he came home to coach football – three years as an assistant in Grand Island and in 1976 he went to Lexington as Head Football Coach for 29 years.