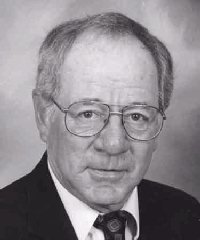 Coach.. It was the 1970-71 school year and Omaha Northwest had just opened its doors for the first time.  Dick was the new head basketball coach moving in from a stint at Gering with a record of 101-50.  He hit the court running and took the “Huskies” to the State Tournament in their very first year of competition.  During his 23-year tenure at Northwest his teams won 305 games with 187 losses. Along with Gering, that makes a lifetime coaching record of 406 – 247 which gives him a  .608 lifetime percentage.  His teams made eleven trips to the State Tournament of which nine were consecutive, making it to the championship round five times and winning it twice.  Among the honors he has already received is the Skip Palrang award, the Ed Johnson award and Metro Coach of The Year twice.  Non-coaching honors include Gering Jaycees Educator of the Year, Northwest Teacher of the Year and Northwest Hall of Fame.