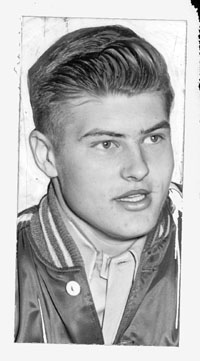 Athlete. This outstanding football and track star was selected to the All State second team and All City halfback his junior year. During this season he totaled up the most kickoff return yards in the state which included the longest at 92 yards. His senior year netted him both All City and All State honors. He packed the pigskin mail for an intercity scoring record of 72 points and set a new record of 8.6 yards per carry. Dick racked many more honors in track where he led Benson in total points scored in his freshman through senior years1950 was his banner year which included the state pentathlon championship, being undefeated in both hurdle races the entire year plus setting a new record every time he ran the lows and tying the state record. He was the only high jumper to clear six feet that year while scoring the most individual points in the “A” division of the state meet. Weston was considered by local sports writers as one Omaha’s greatest prep athletes, often comparing him with the late Nile Kinnick another Benson alum who gained All American honors at Iowa. Dick accepted a football and track scholarship at UNL but a knee injury on the football practice field dashed his collegiate hopes.