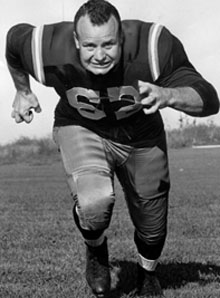 Athlete. Big Don Boll was to the All Big Seven Conference football team when playing for the Nebraska Cornhuskers during the 1950s as an outstanding lineman, traveling quite a long road to reach that athletic perfection. While a high school student at Scribner High in Dodge County, his school had no football program, so Don Boll played head and shoulders above the opposition in basketball, baseball and track. After enlisting in the US Marine Corps toward the close of World War II in 1945, he was encouraged to play football for the Quantico Marine Team and that’s where his start came in that sport. Upon leaving the service he enrolled at the University of Nebraska where he lettered three years as a great guard on the gridiron. In 1953 he was selected as Rookie of the Year while playing for the professional football Washington Redskins.

SCRIBNER — Don E. Boll, 74, of Scribner died Saturday, Dec. 29, 2001, at St. Francis Memorial Hospital in West Point.
He was born July 16, 1927, in Scribner. He attended country school near Scribner and graduated from Scribner High School in 1945. Upon graduation from high school, he enlisted and served in the U.S. Marine Corps from June 6, 1945, until his discharge July 5, 1949, at the rank of sergeant. He was recruited out of the Marine Corps to play football at the University of Nebraska-Lincoln and graduated from there in 1952 with a bachelor’s degree in agriculture. He lettered on the Cornhusker football team all four years of college and was named to the All Big Seven Team. He married Priscilla Fowler Dec. 30, 1952, in Grand Island. He played football for the Washington Redskins from 1952-59 and then played one year for the New York Giants in 1960. He was a member of the United Church of Christ in Scribner, Scribner American Legion Post 121, NFL Players Association, the Tri C’s at church and was active at the Milligan Over 60 Center. He was honored by the Scribner Chamber of Commerce in 1974 with the Native Son Award. He was inducted into the University of Nebraska Football Hall of Fame in 1992 and also was inducted into the Nebraska High School Sports Hall of Fame in 2000.