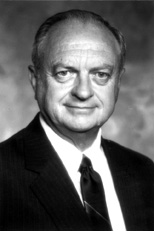 Coach–Creighton Preparatory High School, located in Omaha, has had a plethora of great coaches over the years, but none better at the game of football than Coach Leahy. 1955 would be but one good example. That fall the Bluejays compiled a record of eight wins, no losses and one tie, ending up ranked number one in the state in Class A. In a 17 year coaching career at Prep, Coach Don Leahy had 118 wins on the gridiron, just 25 losses and 7 ties. He had four unbeaten teams and annually kept Prep at the top of football ratings. Perhaps part of his keen understanding of the programs here is that he was himself an outstanding high school player during his own secondary education at Creighton Prep. His pass-run oriented teams woneight state championships.

A graduate of Marquette University, he was one of the top collegiate quarterbacks in the country and played in the Blue-Grey Game in 1951.